Nice blog article about me (or someone like me)

I met an interesting author last week. Of course all authors are interesting to me but this one was particularly so. He has self-published a children's book, in hardback, priced at £14.99. Every publishing fibre in me was telling me that was a crazy price point and crazy format for this kind of book but the facts speak for themselves.

He has sold over 7000 copies. That's a lot of books. And a fair amount of cash too. If he's not careful he might actually become that ultra-rare species of author who actually (shh) makes a living from writing.

So how does he do it? And could you do it too?

Well unsurprisingly it requires a lot of hard work, and persistence, and, I suspect a rather thick skin. Alan Gilliland is a one-man marketing machine, arranging in-store events up and down the country for (at first) his children's book The Amazing Adventures of Curd the Lion (and Us!) and now his second book (a young adult ghost story) called The Flight of Birds too. 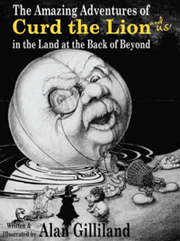 He told me that he is booked up pretty much every weekend of the year - the organisation and planning alone must take a fair chunk of time - and he spends a full day at each bookshop, chatting to readers, talking them through his books, enthusing them about his stories and illustrations and finally selling and signing copies. The effort to achieve sales therefore is considerable and it not only takes a certain type of person to maintain this level of effort, but it also requires the author to be extremely confident in promoting his own work. This is unfortunately where many writers fall down - many (most?) feel uncomfortable standing up to say how good their own book is - in fact it is far more common to hear an author downplaying their writing. Which is a shame.


This, then is the hurdle to success that many self-published authors face whatever the price, format or genre of their book. Without the pr machine of a big publisher clanking into action on their behalf, a self-published author is left with the task of standing up and shouting about how great their book is - and many, quite simply just don't want to do that.
Posted by Clare Christian at 05:44