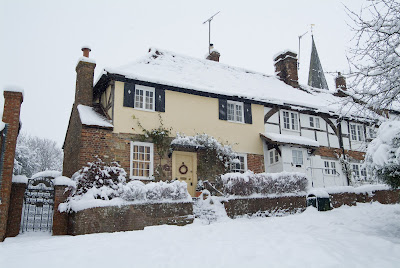 Home sweet home after one night’s snow. Aaah!
Posted by Alan Gilliland at 12:44 No comments: 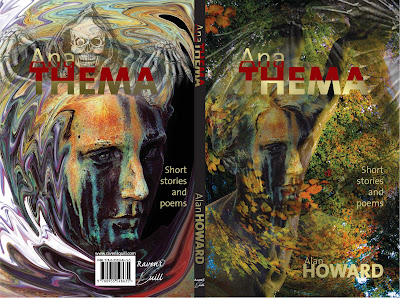 Short stories and poems, loosely linked to the ‘Danse Macabre’ trilogy. 100p £6.99. 6 illustrations. ISBN 9780955548635 paperback print-on-demand available. Held in UK by Gardners wholesalers so can be ordered from bookshops or direct from publisher at same porice for signed, dedicated copy).
e-book version on PRC for Kindle and ePub for other devices ISBN 9780955548659.
Posted by Alan Gilliland at 12:41 No comments:

Here’s what they have made of my new book, ‘The Flight of Birds’:

Lovereading website has made Flight of Birds top of their 'Horror, Fantasy & Sci Fi' section, plus 5th on their 'Mystery and Crime'.
This is their review:

"This is the tale of the haunting, in modern times, of a girl by a ghost exactly resembling her own dead mother. Encountering this ghost imprisoned in the East wing of the Great House Kate is gradually drawn in and compelled to unravel the terrible story of this place.  The reader too will feel utterly drawn in to follow Kate's story through the author's masterful storytelling powers and the two worlds, modern and historical are woven together in to a web in which the reader has no desire to leave but instead continue turning the pages to the surprising denouement.   Through the Tales of Shabby Tattler, a one-eyed vagabond whose power of description seems to bring to life those he depicts, Kate is drawn into a past in which she finds herself a living victim, trapped by circumstance and helpless to alter the terrifying unfolding of events.  This is the first in a trilogy of Gothic tales through which, in a 'Danse Macabre' moves the dark enigmatic figure of the 'Shabby Tattler', the cunning man. Tale-teller and myth-maker is he, or puppet-master of these strange plays, conjuring appearances and disappearances, scenes of tragedy and comedy: manipulator of souls with strings invisible?"
Nice, eh?

Especially after the Waterstone's (Gemma Sealey of St. Albans) one:
"What an amazing tale! The reader is thrust straight into an atmospheric drama, weaving history and fantasy together in this Gothic Danse Macabre, in parts reminiscent of some original brothers' Grimm tales, and the writing is so addictive there's never a good place to put the book down. As for the ending, nothing prepares you for that!
I really was not expecting when I started this book for it to have a treasure trove of such depth and diversity, horror and enchantment. It combines the magical twists of Neil Gaiman with atmosphere of Poe or Machen. The author has, like an Elizabethan alchemist, blended to perfection all the vital serendipitous ingredients to make a most original haunting tale."
Book: The Flight of Birds, Alan Howard. ISBN 9780955548628. 400pp. pb. with flaps. £9.99.
Available from all websites and Waterstones also as ebook: ISBN 978095554866
From Lovereading at:
http://www.lovereading.co.uk/book/5159/The-Flight-of-Birds-by-Alan-Howard.html

AND
My previous effort, ‘The Amazing Adventures of Curd the Lion (and us!) in the Land at the Back of Beyond’ by Alan Gilliland author/illustrator  ISBN 9780955548611 hb. 176pp 80+ illus.,£14.99, has now sold about 6,000
Love reading4kids website made it a Book of Year, Debut of Year and Personal choice of founder last year and widest age-range ever given a book, and are promting it again this year
See quite few kids reviews plus others plus theirs on

The Lovereading comment:
“Reminiscent of the writing of Lewis Carroll and Edward Lear, this brilliant debut children's novel is completely unputdownable as well as being almost uncategorisable.  The author has succeeded in delivering on a book that incorporates a terrifically funny yet mysterious story, full of larger-than-life highly improbable characters that I couldn't begin to do justice to by describing them here, other than to say they are wild and wacky and completely original.  He's also delivered a story that is full of tongue-in-cheek humour and skilful word-play. It's staggering to think that it was not picked up by one of the mainstream publishers and has instead been published quite brilliantly by a small independent start-up company.   It's 174 pages of pure unadulterated pleasure and was one of our top books of 2009. This is a book that will be loved by anyone from 7 to 107.  It may not be as widely available nationwide as some books but that's through no fault of the book.”
Posted by Alan Gilliland at 01:36 No comments:

FISHHOOKS! The snow has cancelled two of my signings.

Petersfield today and Woking on Saturday. Both Waterstone’s.
From next Thursday I’ve solid signings (incl. Sundays) till 22nd driving home from Bury St. Edmunds that night for one day off before Christmas. Great!
It’s up to the top of my long wellies this morning but Rufus (my Vizsla) loves it. Disappeared into a snowdrift charging full tilt around the fields.
Posted by Alan Gilliland at 01:34 No comments: