A time for melancholy?

This day I started, bright and cheery,
Yet all at once began to query
Why? For what should I be cheery?
I sought and sought, till eyes were bleary
And of this trial began to weary,
Till sudden dawned a light so eerie:
Like this rhyme’s end, aren’t most lives dreary?


A Black Stone day, then, despite the sudden sunshine. Returning to yesterday’s theme, a visual homage in my book, Curd the Lion, at the end of the tale... 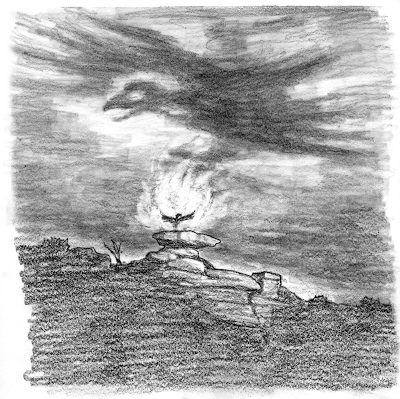 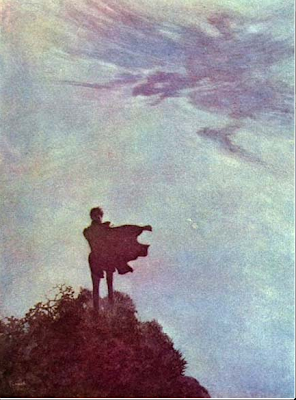 Edmund Dulac’s lovely watercolours from The Poems of Edgar Allan Poe, which in turn lead to... 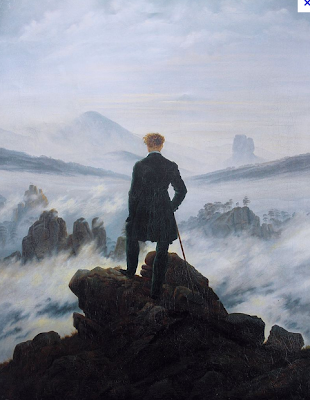 Caspar David Friedrich’s The Wanderer above the Mists, reminding me of his... 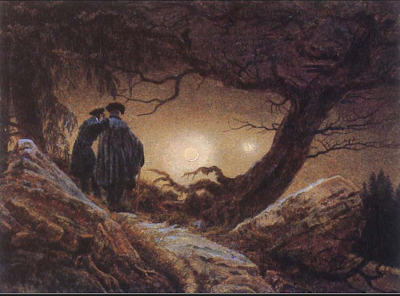 Two Men looking at the Moon, that is somehow reminiscent of... 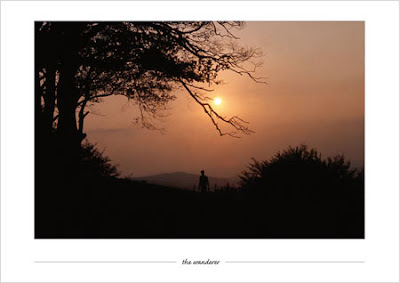 (I have a first edition copy of the beautiful Dulac book, with the original exhibition poster still inserted.)
Posted by Alan Gilliland at 01:43 1 comment: 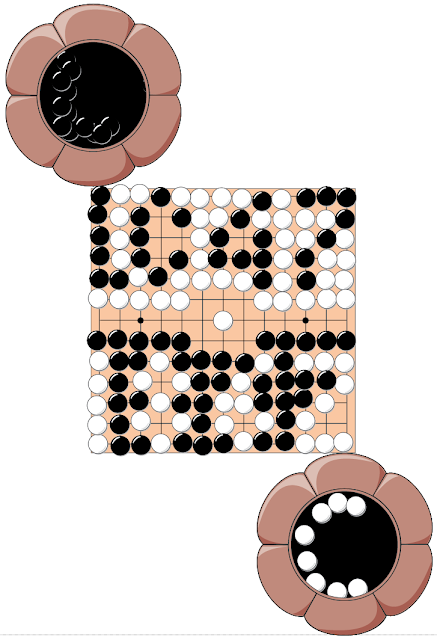 I’m sure Charles Dodgson would have loved Go, had he discovered it, with its deep logic and with all those shiny black and silky white stones resonating on the hollowed-out board...

It was on this day he rowed young Alice Liddell and her sisters up the river, down a rabbit-hole, and sowed the seeds of a delightful myth.

In remembrance, may I reveal one small secret from my own little tale of nonsense with a long title: ‘The Amazing Adventures of Curd the Lion (and us!) in the Land at the Back of Beyond?’

This tale is a nonsensical quest story set at the Turning of the Year. Many of its characters relate to this: notably (and obviously, in this context) The Dodongs.
He has two heads because two heads are plainly better than one, especially in a book of nonsense and because he is Ineffable Emperor of the Land of Nod, which sits in the middle of the Great Sea of Slumber, which is all around us, if only we could see it, which is why he has hands instead of wings – he can swim through the air.
He has scales instead of feathers, for his feathers are so magical he has to hide them inside himself to protect them (two are hidden in Queen Mumbie-Bumbee’s magic pillow).


Why Dodongs, you may ask?
This two-headed Janus bird sits at the Turning of the Year looking forwards into the New Year and backwards into the old (Postvorta and Antevorta) ?
Because his name is simply an anagram of Dodgson, the surname of Lewis Carroll, whose chosen emblem was the Dodo (some say on account of his stutter, which seems like two voices fighting for speech)
and because Janus was the family crest of the Dodgsons.

Hence the Dodong’s anagrammatic parting shot in the book:
“If you would be,
As E. Clerihew, droll,
Heed...”

If you happen upon my book, see how many other characters, in name or function, you can relate to the Turning of the Year,
or to myth, folklore and legend,
or to local history (the book has a real setting, Brimham Rocks, a National Trust site near Fountains Abbey in Yorkshire – and a real map: you can follow the whole adventure and even meet two of my characters there, in a manner of speaking...)

The book.
ISBN 9780955548611. Price £14.99 Available from several good bookshops, Lovereading4kids
website (www.lovereading4kids.co.uk/book/3991 – great site – it has all my reviews on it), Waterstones (stores and website), Amazon if you must, or signed and posted direct from me at Causeway Cottage, 63, High St., Billingshurst, West Sussex, RH14 9QP.

‘Nonsense’ is form of language I think perhaps most nearly and delightfully described by my mother’s sister when a young girl, writing to her older sister at a time when a letter was a letter, a joy and not a sentence:
“...and French! Well, it’s quite a nice little language all by itself. He! He! He! You should have seen it (my essay).”

And its last sentence takes us neatly back to where Alice and her sisters climbed into a boat with the Reverend Charles Dodgson and Mr. Duckworth, on this day in 1862, and they all rowed happily into posterity.

Posted by Alan Gilliland at 08:52 No comments:

HORROR OF HORRORS – THE BLACK AND THE WHITE


The Flight of Birds Gothic ghost story to appear in two editions over the summer holidays.
The original – “Black’– edition with a dark ending.

The ‘White Edition’ – with a more lyrical beginning and ending for those who need a happier resolution. This is the final version of the White Edition’s cover in trade paperback with flaps.

Below, the original ‘Black’ edition with an altogether darker ending. 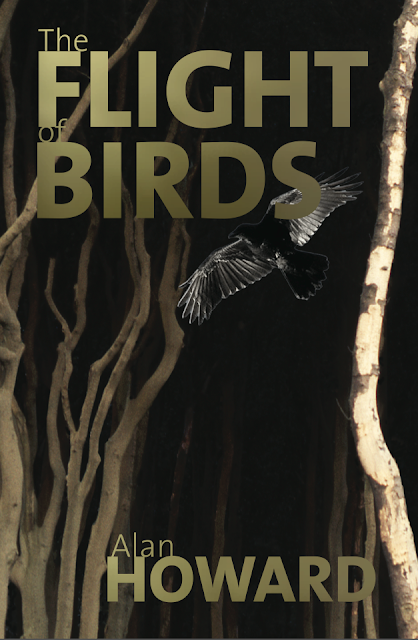 Posted by Alan Gilliland at 04:29 No comments:

Another month without MY car – how time flies!


In June 2012, new management at Peugeot Broadbridge Heath told me that the CPU (or ECU) for my THP had been superceded twice.
They ordered a new one. Installed it. Car wouldn’t even start now.
They said my CPU was of a redundant type given to the first 1,500 THP 207s.
The new Bosch CPU only works with a different component set.
They ordered a new set of components to replace the old set that would not work with the current CPU. (So this could actually have been solved in WEEK ONE had someone used their head!)
Two weeks, and totalling approx. £9,267 of car-hire, later – BACK TO SQUARE ONE!
Peugeot central have vetoed the component set replacement and gone back to insisting on replacing the original CPU with a matching one – on indefinite back order.
Rather than permit me to have an up-to-date car they want to ensure I have a redundant component set, saving themselves £750 odd. Good Maths, guys!
But at last we come to the real reason Peugeot weren’t worried if I told the press about this farce – they knew it only applied to a small (1,500) number of customers who really didn’t matter.
Cheers old chap!
Alan.

[How timely!  Even as I wrote this, I have just received a CUSTOMER SATISFACTION SURVEY from PEUGEOT that starts :

“Dear customer,
Thank you.
Thank you for using our network to have your vehicle serviced or repaired recently.
We are interested in your opinion.
Because we are always trying to serve you better, we would like to get your feedback on the service that you recently received.”]   (What to say, I wonder...)

Value of my car on 10th Feb in pukka condition = £5,500? (At which time it had NINE MONTHS OF EXTENDED WARRANTY BOUGHT FROM DEALER TO RUN)So they could have given me back then a car worth £14,767 and not lost a penny today

I suggested this logic three months ago.

But never fear, they promise me the new OLD CPU will be with the dealer today and I’ll have my T–RUSTY car back soon!

NB. To be fair to Peugeot UK,  they did hire a reliable Ford Galaxy as a replacement vehicle for the duration. They did refund my exploding tyre valve from the previous summer.
They are carrying out all work required free of charge.
Including any remedial work required to offset any damage caused by the car sitting idle in the open air for coming up to five months now,
including brake discs and pads if these have rusted,
ensuring the paintwork, that had six weeks’ worth of bird lime accretion not removed for a further month, is “up to scratch” (ha),
and putting on a new Peugeot exhaust (replaced in disgust last autumn with a non-Peugeot exhaust after theirs fell off with its sling bracket rusted through).
But ensuring I keep to an out-of-date, superceded CPU and ancillary component set, probably by way of experiment to see if it is any more reliable than the first one.
Oh, and not forgetting the piston coil that failed at the same time as the CPU (the third coil in three years – which leads ME to wonder if it might not have been the CPU causing the coils to fail in the first place? If the new CPU leads to further coil failures, I’ll let you know.)


* MD, Peugeot UK. When I write to him on Linkedin, I always receive the same-worded reply from Customer Relations Managers stating just how keenly interested Mr. Zimmerman is in my problem and that they will be reporting back directly to him on the progress and that they will keep me up to date with developments. Except it has nearly always been me who informs them of what is happening. “Rivet, rivet!” as they say in France.
Posted by Alan Gilliland at 09:05 No comments: