How a Witch on art sparked a sudden blog biog.

Contrariwise, after Gormenghast (below), this from National Trust.

The most infuriating thing I’ve seen all year.

This fabulously illustrated retelling of English fairy tales should have made me overjoyed to see so many Arthur Rackham illustrations introduced to a new generation.

But no, I’m livid that The National Trust of all groups has published so many drawings from one of the finest illustrators without so much as a by-line on the cover, inside title page or anywhere I could find, apart from his name topping a six-point list of illustrations at the very end. Scandalous that such a supposedly heritage conscious and aesthetically sensitive organisation can be so disrespectfully remiss. Shame on you, NT!

(The book itself is a great chance for youngsters to see one of the greats – but please tell them who it is?)


Hardback. This terrific collection of 12 stories is a great introduction to the different types of traditional story and their place in English oral and written heritage. Includes tales of giants, dragons, fairies and Arthurian romance. Each tale is linked with a specific place or county in England. The book includes notes and histories of each story. 224 pages. ISBN: 1905400659.

(The National Trust have also forgotten to mention on their website the author of this fine re-telling, Rosalind Kerven. Luckily they remembered to put that on the cover)

Blogger’s note: This piece was written by my dear colleague, Mr Howard. Should it transpire that on that occasion his glasses were steamed up and he failed to notice Arthur Rackham’s name prominently displayed on the cover or title page, then all would-belligerent litigants are referred to that gentleman for resolution of any perceived slights upon their honour (his duelling credentials are impeccable and he always prefers to settle out of court).

Best news: Vintage are publishing Gormenghast with Mervyn Peake’s illustrations, many previously unpublished on July 7th (see below).
Posted by Alan Gilliland at 07:38 No comments:


One Response to Curd the Lion and friends

Katherine Langrish | March 15, 2011 at 10:53 | Reply
I agree this is a really unusual book – with brilliant illustrations, too. Think Edward Lear, Lewis Carroll, lots of wordplay and paradoxical fun, and you’ll be there. Not for every child, perhaps, but any budding chess players or crossword puzzle fiends will have a whale of a time. It demands something of the reader, and that’s not a bad thing at all.

Thank you Katherine!
Posted by Alan Gilliland at 04:39 No comments:

My absolut(e)ly favourite Witch! (not to be confused with my favourite vodka!)

Today ‘Bookwitch’ posted a lovely review of ‘Curd the Lion’ on her blog – see here:
http://bookwitch.wordpress.com/2011/03/15/curd-the-lion-and-friends/

I can’t resist quoting it in full (but go there anyway because she’s posting images too, then read her other reviews):


Curd the Lion and friends

Posted on March 15, 2011 by bookwitch|
“I’m in agreement with Tony Benn and Derek Walcott. The Amazing Adventures of Curd the Lion and us in the Land at the Back of Beyond (phew, got there at last…) is pretty good. Alan Gilliland, who wrote the story and illustrated the whole book himself, has been hard at work getting people of note to read and comment on his book. Now he’s targeted the bookwitch as well.


It’s, well, it’s about these four soft toys who go on an adventure to the Back of Beyond. Once you’ve decided that soft toys do these things, it’s perfectly natural. After all, what is Winnie the Pooh if not a soft toy?
Just the idea of calling a toy lion Curd the Lion requires a sense of humour, and the book is riddled with puns and other playful twists of words and phrases. Most of them will pass over the heads of young readers, but an adult will have fun. (‘What is pondering? It’s what you do by a pond.’) And I reckon that reading this book aloud to a child would be the most fun. It’s quite long, at over 150 pages, and the pages are large to accommodate all the pictures.
Curd belongs to Henry and so does Pilgrim Crow, whereas the hyena Sweeney the Heenie and the snake O’Flattery are Henry’s twin sister Henrietta’s toys. The Mum’s brooch has disappeared and she is angry. If not found, she will take the toys to Oxfam (or similar) and have them sold.
Obviously the toys love their children, so they set out to find the brooch, because Curd actually witnessed it being taken by the Great Raven. They encounter many creatures and many dangers en route to the Back of Beyond, but Curd’s bravery and wisdom gets them there and back. Naturally.
The black and white illustrations are magical, although I have to admit to being slightly scared by the man in the moon on the cover. Alan seems to have a long and solid background doing this kind of thing, and he has wisely formed his own publishing company to look after his books. That might mean that it’s harder to get the books into the shops. I don’t know. Alan seems to work hard, doing signings all over the place, and I’d say that as long as the book gets to children, it will be popular.
I surprised myself by wanting to read about this cheesy sounding lion, and also by enjoying it as much as I did. But now I really do want a piece of Brie.”

Thank you so much, Bookwitch!
Posted by Alan Gilliland at 03:36 No comments:

So much to do – so little time.
Wanting to prepare some new drawings of my Midden-Heap Gang, I have been inundated with work from other publishers in last week and a half (13 maps for two Penguin titles, weapon cutaway for Osprey, 3D bird’s eye view of battle map plus 3 flat for Windmill and now 4 facades of a building and a ground plan for a model set for Windmill).
Will it happen in time, I wonder? Will its heroes, Earth-Nut, Small Bugloss, Butterbur and Whortleberry, Codlins’n Cream, Grasspea and the rest of my ‘bunch of seeds who refuse to put down roots and grow up, but decide to have fun instead’ see the light of day in time, I wonder? 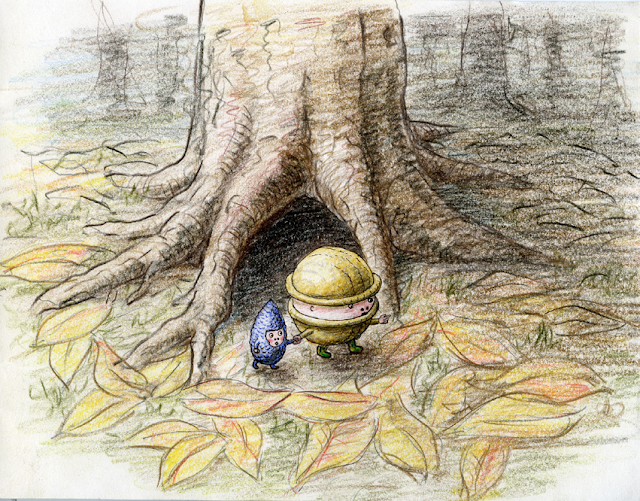 Posted by Alan Gilliland at 01:59 No comments: