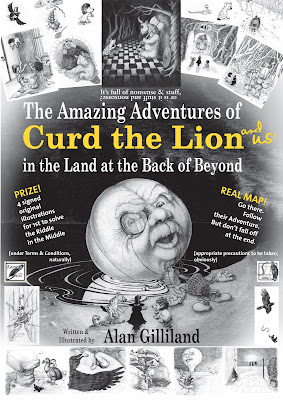 FICTION: Why “pencilnotes” when they are obviously typed? Because I have a Magic Pencil that creates whole worlds as long as I hold it upright, sharpen it regularly and make sure I’ve got enough paper to keep it well fed. When it becomes too short, to avoid any argument I go and buy another one. By this simple process I keep a well-tempered pencil that never runs out on me.
I am often asked, “where do your ideas come from?” I have just answered: “Putting my pencil to paper”. Sometimes it draws them out, sometimes describes them in words.
It’s very simple and can be tried by anyone.
Posted by Alan Gilliland at 02:06

Email ThisBlogThis!Share to TwitterShare to FacebookShare to Pinterest
Labels: alan gilliland, amazing adventures, curd the lion, land at the back of beyond, raven’s quill, ravensquill