In that curious state of wakeful sleep as images of dream are replaced by mundane consciousness, this phrase from my early childhood surfaced, together with images of a letter written by my favourite aunt, Dora (and we all did, as children, adore her), when she was a child, in the days when the art of letter-writing existed, even to be enjoyed by children.
This much derided title quote, exemplar of rote, finds another meaning in the care and loving attention given here to a simple letter written to her older sister who had just left home for an hotel in London.

So, in homage to her and that art, I present in full that letter (and some examples of her character, below): 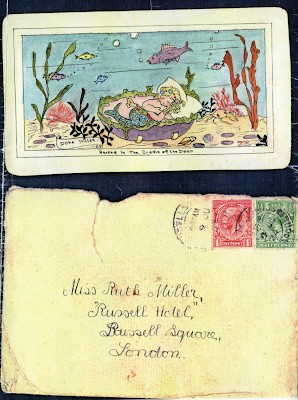 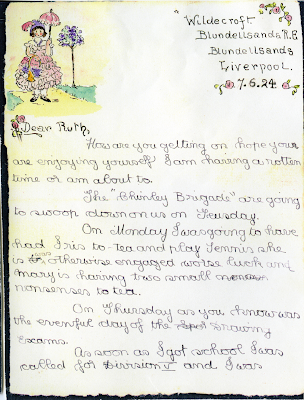 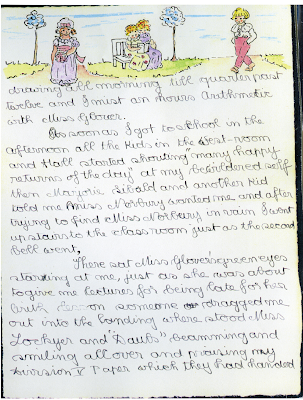 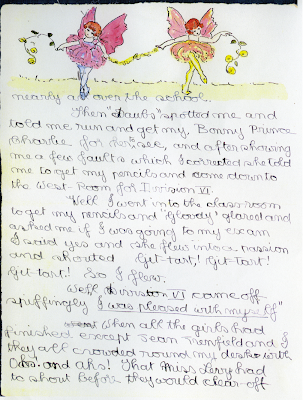 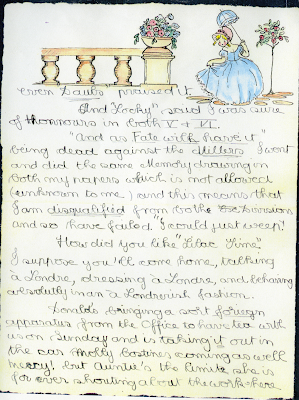 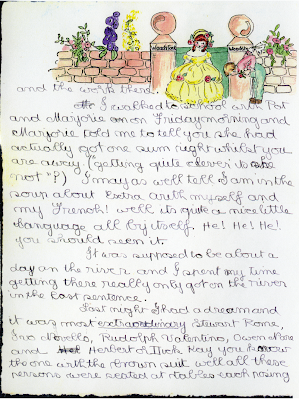 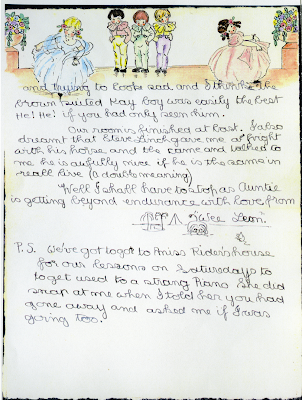 Transcription of the text, below (or click to blow up pictures)

If you have read this letter in full, you may see, even then, the infectious wit and sparkle that she carried with her, like a fairy godmother, all her days.
As an old lady, she had only to enter a room full of random children and, despite her decrepitude and deformities, the patterns of attraction were as palpable as the re-reordering of iron filings in the presence of a magnet.
Within minutes of sitting down she would be surrounded by eager children, listening to her hundred tales and witticisms, oblivious to to any physical fault by which an adult might judge her, fascinated by her laughing eyes and infectious chuckle.
When the three sisters, Ruth (to whom this letter was addressed and who treasured it enough that I have it today), Dora and Mary (my mother, one of the small nonsenses of this letter) were together, hysteria swept through the house, bowling over any pretence of decorum such that even my father had to put away seriousness and the morning’s paper-reading (a sacrosanct hour that brooked no interruption).
Two instances of that character spring immediately to mind, both shocking and a little comic.
When her husband, Malcolm, an accountant with a kleptomania for documents to the point where their dining room could no longer be used, being piled with old newspapers, files and papers of no longer determinate provenance, on the bureau, under the table, on top of the table, seated on the chairs and lining the walls to the ceiling, died, we attended his funeral, staying at their house the night before.
That morning, after stoking the old coal-fired boiler, preparing the breakfast and ourselves to receive the pall-bearers, come to collect the coffin, we filled in the time with Dora recounting stories of their lives together such that, when these drab top-hatted gentlemen came soberly knocking, the door was opened to the scene of a family in hysterics, to which the look on their faces merely added another fit.
Later, after the funeral in a church packed with what appeared to be half the town’s population (he was a man of good works), we repaired to an hotel nearby for the wake.
A suitably sad-looking lady of her acquaintance appeared, to offer her deepest condolences and sympathy, to which my dear old aunty retorted, “ Nonsense! I’m glad he’s dead.” Observing the shock on the faces of that lady and all around, she added, in her inimitable fashion: “You see, when you have loved someone as deeply and as long as I have, you cannot bear to them suffer so. His passing was a mercy.”
Again, after continuing to manage for years alone in their house, she had a serious fall, cracking her hip and was hospitalized. On discovering her age, condition and circumstance, her doctors decided that she must, on leaving, repair to an old people’s home where she could be properly ‘taken care of.’
On hearing this,old auntie was heard to say, “No one is going to put me in kennels,” and she, returning as we do to our origins, promptly set about dying, ‘toute suite!’

Transcript.
P1.
Dear Ruth,
How are you getting on hope you are enjoying yourself  I am having a rotten time or am about to.
The “Chinley Brigade” are going to swoop down on us on Thursday.
On Monday I was going to have had Iris to-tea and play tennis she is (was) otherwise engaged worse luck and Mary is having two small nonsenses to tea.
On Thursday as you know was the eventful day of the drawing exams.
As soon as I got (to) school I was called for Division V and I was
P2.
drawing all morning till quarter past twelve and I mist an hours Arithmetic with MIss Glover.
As soon as I got to school in the afternoon all the kids in the West-room and Hall started shouting “many happy returns of the day” at my bewildered self  then Marjorie Sibald and another kid told me Miss Norbury wanted me and after trying to find Miss Norbury in vain I went upstairs the the classroom just as the second bell went.
There sat Miss Glover’s green eyes staring at me. just as she was about give me lectures for being late for a Arith lesson someone dragged me out into the landing where stood Mis Lockyear and “Daubs” beaming and smiling all over and praising my Division V Paper which they had handed
P3.
nearly all over the school.
The “Daubs” spotted me and told me run and get my Bonny Prince Charlie for her to see, and after showing me a few faults which I corrected she told me to get my pencils and “Glovey” glared and asked me if I was going to exam  I said yes and she flew into a passion and shouted Git-tart,! Git-tart! Git-tart.! So I flew.
Well Division VI came off spiffingly “I was pleased with myself”
When all the girls had finished except Jean Trenfield and I they all crowded round my desk with Ohs! and Ahs!  that Miss Levy had to shout before they would clear off
P4.
even “Daubs” praised it
And ‘Locky’ said I was sure of honnours in both V and VI.
“And as Fate will have it” being dead against the Millers I went and did the same Memory and the work there.drawing in both my papers which is not allowed (unknown to me) and this means that I am disqualified from both Divisions and so I have failed. “I could just weep”
How did you like the “Lilac Time.” I suppose you’ll come home, talking à Londre, dressing à Londre, and behaving absolutely in an à Londrerish fashion.
Donald’s bringing a sort of foreign apparatus from the Office to have tea with us on Sunday and is taking it out in the car  Molly Costines coming as well  Mercy! but Auntie’s the limit  she is forever shouting about the work here
P5.
and the work there.
I walked to school with Pat and Marjorie on Friday morning and Marjorie told me to tell you she had actually got one sum right whilst you are away {“getting quite clever is she not”?) I may as well tell I am in the soup about Extra Arith myself and my French! Well its quite a nice little language all by itself. He! He! He! You should seen it.
It was supposed to be about a day on the river and I spent my time getting there really only got on the river in the last sentence.
Last night I had a dream and it was most extraordinary Stewart Rome, Ivo Novello, Rudolph Valentino, Owen Nare(s) and Herbert or Dick Kay you know the one with the brown suit well all these persons were seated at tables each posing
P6.
and trying to look sad and I think the brown suited Kay boy was easily the best He! He! if you had only seen him.
Our room is finished at last. I also dreamt that Steve Linch gave me a fright with his horse and came and talked to me  he is awfully mice if he is the same in real live (a double meaning.)
Well I shall have to stop as Auntie is getting beyond endurance  with love from
‘Wee Leon’.

P.S. We’ve got to go to Miss Rider’s house for our lessons on Saturdays to get used to a strang(e) Piano  She did snap at me when I told her you had gone away and asked me if I was going too.